The casual contacts you have in a town like Nice. Stephanie and I are at La Merenda when suddenly this British M&A guy I met in Paris at Café de Flore once shows up as if from nowhere and offers me a drink. It's more than a year ago that I thought giving him my number was a good idea, but some people just refuse to forget the stupid things you do while drunk.

After more than a few Vesper Martinis I'm in his apartment on Rue de la Buffa, as soon as I mention growing up in LA he wants to watch Crash on his big screen TV. I tell him it's too close to home while the real reason is that I hate Sandra Bullock ever since she tried to sleep with my dad (before she was famous, obviously).

Instead he lets me go and I wander home, past the street performance on the Promenade. The night is warm and I know it will be at least until the end of August. When I get back home Stephanie is already asleep, her clothes scattered across the floor of our 5th floor room. I can see the Negresco from our balcony, thinking that maybe Henry is there, at his balcony, looking for me too. 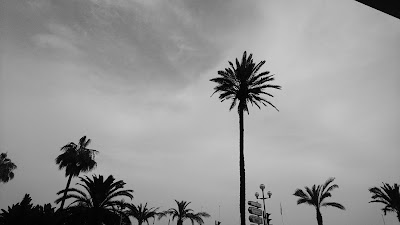 Posted by AVY at 2:53 PM
Email ThisBlogThis!Share to TwitterShare to FacebookShare to Pinterest